A new Covered California analysis describes the potential impact to consumers if the increased health insurance subsidies that were part of the American Rescue Plan are allowed to expire at the end of 2022.
In California, all consumers would face premium increases, including 1 million lower-income consumers (individuals earning less than $32,200 per year), who would see their premiums more than double.
In addition, middle-income individuals and families (for individuals, those earning more than $51,520 per year), would no longer be eligible for any financial help and would face higher monthly premium costs that for many will mean annual cost increases in the thousands of dollars.
The increase in costs could force more than 150,000 people in California and more than 1.7 million nationally to drop their health insurance.
La versión en español de este Comunicado puede ser descargada en este enlace
March 3, 2022 – SACRAMENTO, Calif. — A new Covered California analysis shows how the expiration of the American Rescue Plan would dramatically raise health insurance premiums for millions of people, force many to drop their health coverage, and potentially reduce the benefits that many people receive when they seek care. The analysis comes as Congress considers extending the premium subsidies that are part of that law before they expire at the end of 2022.
“The American Rescue Plan provided more financial help than ever before, and helped a record number of people get covered and stay covered,” said Peter V. Lee, executive director of Covered California. “Without an extension, millions of people will face staggering premium increases, and many will be priced out of their health care coverage.”
Covered California’s analysis — “Premium Rate Shock and Coverage Loss Inevitable if Enhanced Financial AssistanceIs not Extended This Year to ConsumersWith Affordable Care Act Insurance”— details the increased enrollment that the higher subsidies supported, the particular groups that benefited in California, the potential premium increases that consumers would face in October of this year if the subsidies are not continued, and the likely result of more than 150,000 Californians and 1.7 million people across the nation being priced out of coverage.
The American Rescue Plan Led to Record-High Enrollment
The American Rescue Plan (ARP) is one element of the federal response to the COVID-19 pandemic. It includes provisions that made health insurance dramatically more affordable in Affordable Care Act marketplaces.
The law is responsible for:
Increasing the amount of financial help available for all consumers.
As a result, the monthly premium paid by Covered California consumers dropped 20 percent from 2021 to 2022, and enrollment hit a record-high of 1.8 million people, of whom 92 percent are now getting subsidies. Nationally, monthly premiums dropped 23 percent and enrollment reached 14.5 million.
“The law lowered premiums and boosted enrollment — with the biggest beneficiaries being communities of color, lower-income Americans and many in the middle class who got help paying for their coverage for the first time,” Lee said. “In the absence of federal action to extend these policies this year, people in California and across the country will have their access to health coverage and care dramatically reduced.”
Failure to Continue the American Rescue Plan Subsidies Would Result in Significantly Higher Health Insurance Premiums
Covered California’s analysis found that if the subsidies provided by the American Rescue Plan were allowed to expire, enrollees who currently earn less than 400 percent of the federal poverty level ($52,000 for a single person and $106,000 for a family of four) would see their monthly premiums rise by an average of $70 per month, or 71 percent for 2023.
The analysis also found that Californians who could least afford the price hike — those earning between $17,775 and $32,200 a year for an individual and from $36,570 to $66,250 for a family of four — would be affected the most, with their health insurance premiums more than doubling. A total of 1 million Covered California consumers are in this income bracket, which is 250 percent of the federal poverty level or below.
Table 1: Potential Per-Member Premium Increases for Covered California Subsidized Enrollees Earning Less Than 400 Percent of the Federal Poverty Level in 20231 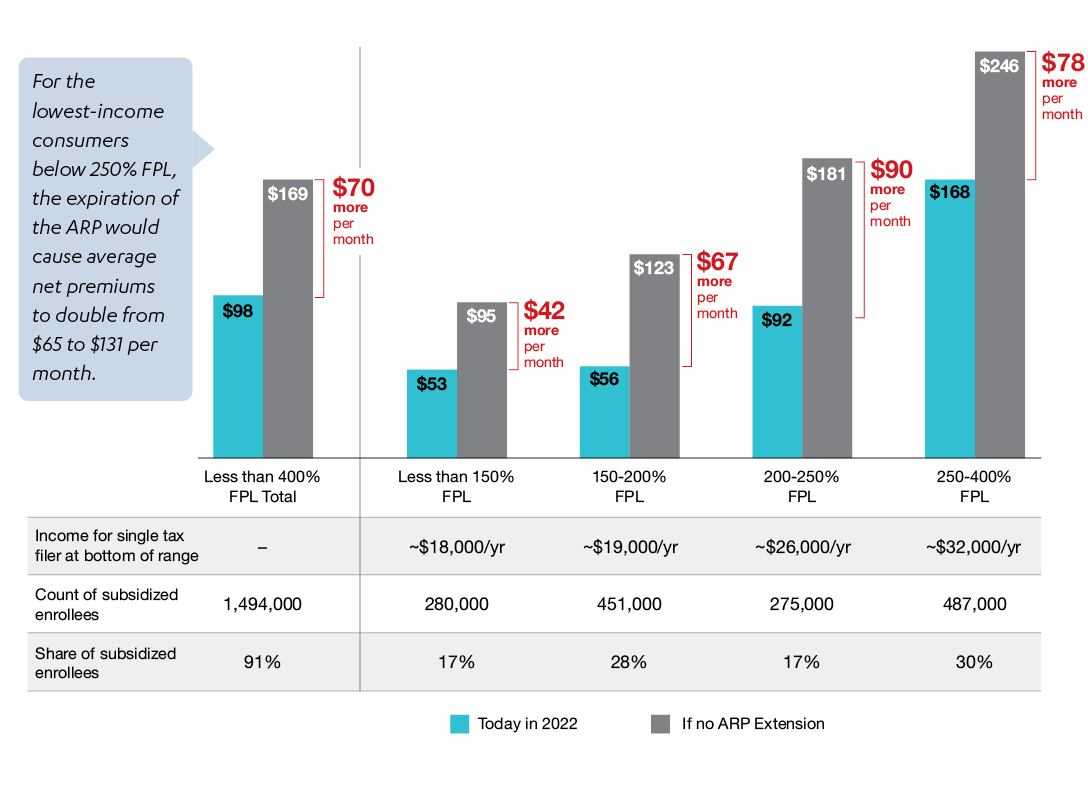 “While lower-income consumers would still be getting federal tax credits, many of those who would see their premiums double will be priced out of the coverage they want and need,” Lee said. “A total of 1 million Californians, those who can least afford it, will be hit the hardest if these critical subsidies are allowed to expire.”
The expiration of the American Rescue Plan subsidies would also mean the return of the so-called “subsidy cliff” of the original Affordable Care Act terms that meant middle-income consumers — individuals who earn more than $51,520 per year and families of four who earn more than $106,000 per year — would not be eligible for financial help, no matter how much it cost them as a percentage of their income. In California nearly 150,000 middle-income consumers (9 percent of those getting subsidies) benefited from lower premiums due to the expanded financial help. Without an extension of these subsidies, these middle-income consumers would see their premiums increase by an average of $272 per member, per month in 2023 — with families getting subsidies facing far higher household premium spikes.
Table 2: Potential Per-Member Premium Increases for Covered California Subsidized Enrollees Earning More Than 400 Percent of the Federal Poverty Level in 20232 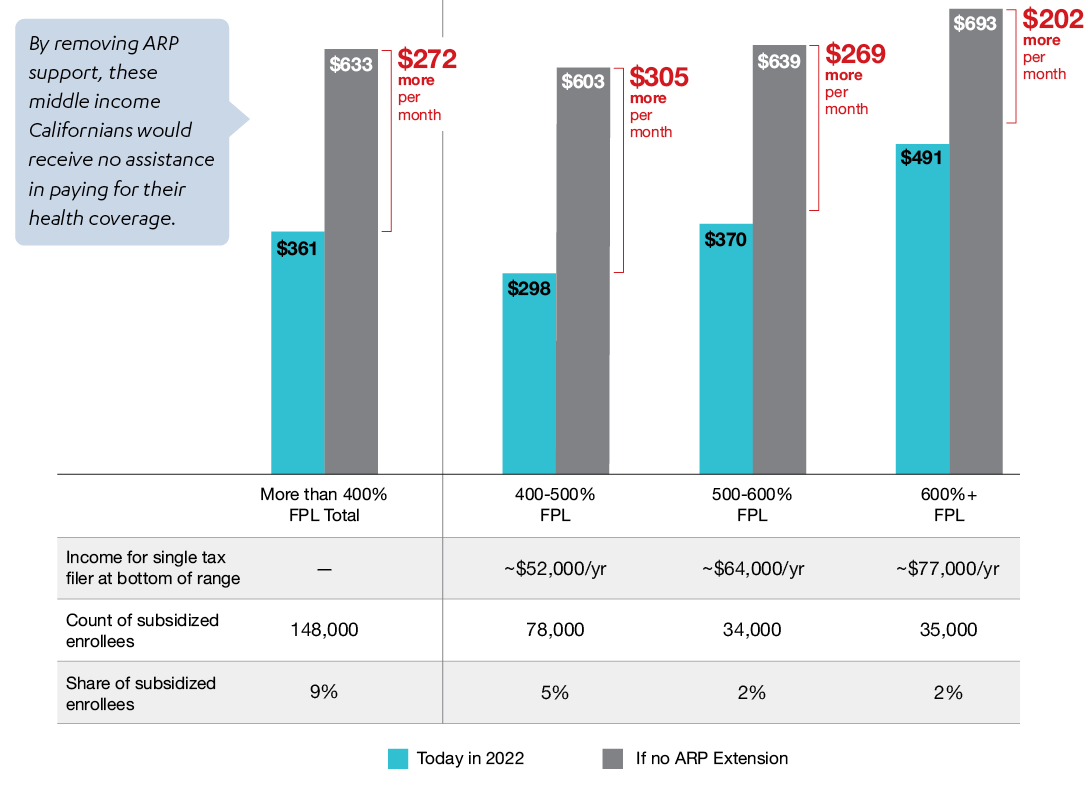 The report also gives real world examples of the premium increases that look behind the averages to the lived experiences of consumers that differ by their age, family size, income and where they live.  The following examples are modeled after consumers who are benefiting from the ARP subsidies and show what will happen to their premiums if those subsidies expire.
Premium Impacts of Removing Californians’ American Rescue Plan Subsidies
The premium increases would be seen not only by Covered California enrollees, but also by all of the estimated 2.2 million people enrolled in the state’s individual market, since the risk mix would likely worsen with healthier consumers more likely to drop coverage.
The second blow of higher premiums (due to the eroded risk mix within the marketplace likely leading to premium increases) is not reflected in the figures detailed in Covered California’s analyses. These increases would have the biggest impact on those earning more than 400 percent of the federal poverty level ($52,000 for an individual) who would have no premium support to shield them from rising costs.
Consumers would see the increased rates starting in October, when they begin receiving their renewal notices for the 2023 coverage year.
“Whether you are one of Covered California’s record-high 1.8 million enrollees, or you get your coverage directly from a health insurance company, you will be paying a lot more next year if these subsidies are not extended,” Lee said.
Millions of People Will Lose Coverage or Benefits
The Congressional Budget Office estimates that the rising premiums would price 1.7 million Americans out of coverage.3 In California, this could mean that more than 150,000 people could decide to drop their coverage due to the high cost.
Rolling back the increased subsidies would also have a disproportionate impact on California’s communities of color, who experienced significant increases in enrollment during the pandemic.
Many people may also try to remain insured by switching to less-comprehensive coverage, with higher deductibles and a lower cost. In doing so, consumers could expose themselves to higher out-of-pocket costs that could delay or prevent them from accessing care.
“The American Rescue Plan built on the Affordable Care Act and took a huge step toward expanding coverage and giving people the protection and peace of mind they deserve,” Lee said. “Without congressional action, consumers will start seeing these higher premiums when they get their renewal notices in the fall, and they will be faced with tough decisions.”
About Covered California
Covered California is the state’s health insurance marketplace, where Californians can find affordable, high-quality insurance from top insurance companies. Covered California is the only place where individuals who qualify can get financial assistance on a sliding scale to reduce premium costs. Consumers can then compare health insurance plans and choose the plan that works best for their health needs and budget. Depending on their income, some consumers may qualify for the low-cost or no-cost Medi-Cal program.
Covered California is an independent part of the state government whose job is to make the health insurance marketplace work for California’s consumers. It is overseen by a five-member board appointed by the governor and the Legislature. For more information about Covered California, please visit www.CoveredCA.com.
1 Net premium amounts shown are per member, per month, among Covered California enrollees found eligible for subsidized coverage under American Rescue Plan at the end of the 2022 open-enrollment period (approximately 1.64 million individuals).
2 Net premium amounts shown are per member per month, among Covered California enrollees found eligible for subsidized coverage under ARP at the end of the 2022 open enrollment period, approximately 1.64 million individuals.
3 Congressional Budget Office (2021). Reconciliation Recommendations of the House Committee on Ways and Means (revised Feb. 17, 2021). https://www.cbo.gov/system/files/2021-02/hwaysandmeansreconciliation.pdf.