Getty Images
It’s easy to forget that Serena Williams’ first brand partner was Puma, a deal that was signed in 1997 and worth a reported US$12 million (more on that in a lovely trip down memory lane here). The American has since become synonymous with Nike but it’s worth remembering some of the colourful designs she came up with alongside the German sportswear company, including a Cameroon-themed outfit (pictured below, left) worn at the 2002 French Open.
There has been plenty of reminiscing in recent days after the younger of the Williams sisters announced her imminent retirement – or ‘evolution’, as she described it – from tennis. The 40-year-old has been a constant, dominant presence in the sport over the last two decades, mopping up everything there is to win on the court, which has made her highly sought after away from it. 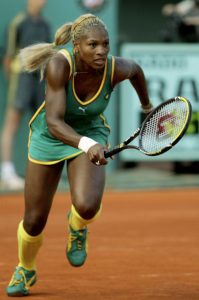 Indeed, Williams has regularly been one of the only women to feature on Forbes’ annual list of the highest-paid athletes. Even this year, after playing significantly less tennis, the 23-time Grand Slam champion still appeared 31st in the rankings with earnings of US$45.3 million, some US$45 million of which came from her endorsement deals.
According to Forbes, Williams has more than 12 sponsors, a commercial portfolio that puts her among only a handful of those who have been able to master their craft while simultaneously building a personal brand that far transcends their sport. As well as Nike, Williams’ partners include Anheuser-Busch InBev, DirecTV and Gatorade, in addition to Gucci, Subway and Ford.
Williams, though, has also been a pioneer in what has traditionally been a predominantly white sport. Never one to shy away from social issues, she is unique in the way that she has worked with her brand partners to champion racial and gender equality, as well as more recently featuring in campaigns highlighting her resilience during motherhood.
Broadly speaking, Williams’ retirement will bring with it challenges for women’s tennis, which may have to find new ways to build its audience and attract sponsors in the absence of one of global sport’s most recognisable names. Organisers of the men’s game will be watching closely as the end nears for its own era of stars.
Williams, however, will have no such problems. She is among only a handful of sports stars whose commercial value will endure after she stops playing tennis and the former world number one also has a fledgling venture fund, which she suggested in her retirement announcement was becoming an increased area of focus.
The precise timing of Williams’ retirement is still unconfirmed, but what is certain is that her star will continue to shine long after she exits the court for the final time.
Bloomberg recently reported that companies from the cryptocurrency sector have now spent US$2.4 billion on sports marketing in the past 18 months in a push for brand awareness and greater legitimacy.
I feel like I’m banging the same drum sometimes but barely an edition of this newsletter goes by without another sports team having a bad experience with a crypto sponsor.
The first of your most recent examples comes from Arsenal, who failed in their appeal against a ruling by the Advertising Standards Agency (ASA), which deemed the club’s adverts promoting fan token company Socios to be ‘misleading’ and ‘irresponsible’.
The second comes from third-tier English soccer side Barnsley, who moved to terminate their deal with Hex barely a week after it was signed following a backlash from supporters and an investigation into discriminatory social media posts made by individuals linked to the partnership.
While Barnsley is investigating rampant homophobia among senior people in sponsors Hex, allow me to draw your attention to *the most remarkable T&Cs clause of all time.*

These are who Barnsley thinks its fans should do business with. pic.twitter.com/6ZCtEfMA4e
And the third is in Italy, where Inter Milan could reportedly begin legal proceedings against their main sponsor DigitalBits after the blockchain network missed a set of payments to the club.
I appreciate that bad news stories are more likely to generate traction than the crypto sponsorships that are running along smoothly, but it feels like something has to give soon.
About €295 million, according to Uefa’s new ‘Business Case for Women’s Football’ report, which interestingly has sponsorship ahead of media rights as the fastest-growing revenue stream in the women’s game over the next ten years.
I wrote in this newsletter back in May that Electronic Arts might have to invest some of the money it is no longer spending with Fifa on a substantial marketing push to build awareness of EA Sports FC.
Avid gamers might be aware of the change but there’s always the risk that more casual users will not be aware that the new brand is likely to be a continuation of the soccer title the company has produced for years – just with a different name.
EA doesn’t seem to be leaving anything to chance, with two recent deals ensuring that it will have plenty of opportunities to address any confusion in close association with Europe’s most visible soccer properties.
The video game developer has become the title partner of LaLiga, reportedly committing €30 million per year for the privilege, while it is also going to sponsor Sky Sports’ coverage of the Premier League.
Given the amount it is reportedly saving by ending its partnership with Fifa, it’s not a surprise to see EA investing a fair portion of its marketing budget in sport.
Want this feature delivered directly to your inbox every other Thursday? Sign up to the SportsPro sponsorship and marketing newsletter here.
Enjoying SportsPro content? Create your MySportsPro account and get enhanced access.
Have an account? Log in