KL Rahul the skipper of Lucknow is the Player of the Match. He says that he tries to stay in the moment and he tries to play the situation, and he does what the team wants him to do, fingers crossed that he continues his good form. Adds that the first thought he had was to just get bat on ball and get off the mark, he wanted to just get the single away, then he is lucky to on till the end. Mentions that he tries to assess the pitch and the conditions before and he does only what the situation asks him to do he just trying to do the best of his ability. Says that the teams can defend well, or do well in the Powerplay, or bowl well at the death have done well in the tournament and he likes having all-rounders in the team, says that he has options in the middle and it gives them the depth.
Stay tuned for the presentation…
Krunal Pandya is down for a chat. He feels great as it was a collective effort from the team with the perfect plan. Adds that Rahul’s knock was a terrific one and the pitch was stopping a bit and he tried to bowl slower balls and varied the pace. Adds that the bowlers executed the plan really well and this will boost the confidence. On Kieron Pollard’s wicket, he thanked God that he took his wicket as Pollard would have been chirping every day that he took his wicket. Mentions that the agenda is to win the game and improve and trust the process.
Rohit Sharma the skipper of Mumbai, says it was a good pitch to bat on and it should have been chased down but Lucknow defended well. Adds that they should have had a string of partnerships but some irresponsible shot, including his, has held them down. Tells that they haven’t batted well enough and the middle order needs to take responsibility as well, someone should anchor the innings and play the longer innings and that is hurting them. On Tim David, he says that it has been discussed but there are a lot of players and they try to give enough games to the players and settle the XI. They are trying not to make many changes, there are discussions anyways but he feels that whoever plays needs enough time to settle in.
After a lone fight in the first innings from KL Rahul, it’s been a relatively collective bowling performance from Lucknow. They were disciplined with their bowling and were rewarded well for the same. They might have not grabbed early wickets but they did well to pick up wickets in a cluster post the Powerplay which put Mumbai under immense pressure. All the bowlers got a wicket at least. Except, Dushmantha Chameera, but he was excellent he gave away just 14 runs in his spell of 4 overs. Krunal Pandya was the leader of the pack he picked up 3 wickets in his spell. A clinical show from Lucknow at the end they were calm, composed, and have got over the line with ease.
Mumbai got off to a decent start with Rohit Sharma striking the ball well, while Ishan Kishan was struggling to get going. It was good for them till the Powerplay. In the next 6 overs, they lost four wickets which took the momentum away from them completely. Tilak Varma once again played a crucial knock and gave them a slight ray of hope but he too perished. There were no partnerships in this innings from Mumbai which was the issue for them. It’s the same issue for Mumbai that goes on. They did bowl well today, but their batting once again has been disappointing.
A convincing victory for Lucknow at the end! After losing their previous game, they are back on the winning track. With this victory, Lucknow have grabbed a total of 10 points and they have moved into the top four. While the drought in Mumbai’s camp continues, eight in eight for them now.
19.6 overs (0 Run) Flatter and outside off. Bumrah knocks it to point. Lucknow win comfortably by 36 runs.
19.5 overs (0 Run) Tossed up, on off. Defended out.
Jasprit Bumrah walks out to bat.
19.4 overs (0 Run) OUT! TAKEN! Pandya takes his third wicket! A full toss, outside off. Sams smashes it high and to eep cover where Ravi Bishnoi pouches it.
Hrithik Shokeen comes to the crease.
19.3 overs (0 Run) OUT! RUN OUT! Angling on the pads. Sams flicks it to short fine leg where Jason Holder is standing. Sams is ball watching while Unadkat wants a single and is halfway mark. The ball is thrown to Pandya who whips the bails off. Easy run out there. 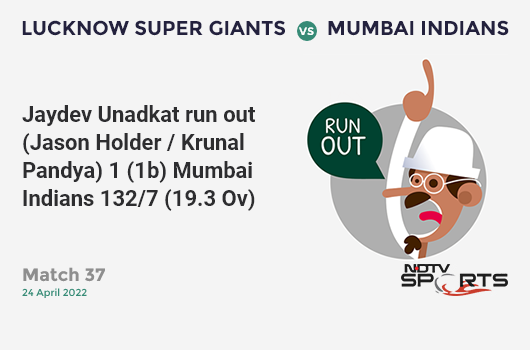 Run out chance! There is a throw at the bowler’s end. The replay shows Jaydev Unadkat is well short. OUT shows the big screen!
19.2 overs (1 Run) tossed up, on middle, it is hit to deep mid-wicket for one.
19.1 overs (0 Run) OUT! TAKEN! Fuller and on off. Pollard heaves it to deep mid-wicket where Deepak Hooda runs to his right and takes a sharp catch. 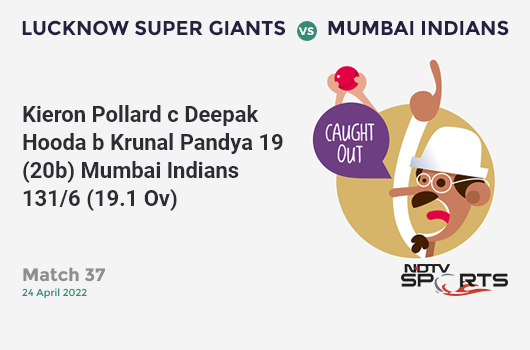 Jaydev Unadkat comes to bat now.
19.1 overs (1 Run) Wide! Full and way outside off. Pollard leaves it.
18.6 overs (1 Run) A single and Lucknow have the game as well. Almost! Too full and on middle, tucked to deep square leg for a single.
18.5 overs (1 Run) Full and on off. Sams steps across and flicks it to square leg where KL Rahul certainly saves a boundary. A single.
18.4 overs (0 Run) Full ball, angling outside off, just near the tramline. Sams swings and misses. Kieron Pollard has a word with the umpire.
18.3 overs (1 Run) Fuller ball, outside off. Pollard smashes it hard to long off for a single. Lucknow have placed too straight, long on and long off.
18.2 overs (1 Run) Very full and on off, drilled down to long off for a single.
18.1 overs (0 Run) This is wide outside off again, Sams shuffles a bit and swings but misses. No wide given.
18.1 overs (1 Run) Wide! A fullish delivery, way outside off. Sams leaves it alone.
Dushmantha Chameera will bowl the penultimate over.
17.6 overs (1 Run) A yorker, on middle. Sams squeezes it out to fine leg for a single. Superb over from Jason Holder, just 6 runs of it.
Daniel Sams comes to the crease.
17.5 overs (0 Run) OUT! TAKEN! The man in form, Tilak Varma goes. Mumbai in deep trouble. A low full toss, angling on off. Varma flicks it hard but fails to get the required elevation. Hits it straight to deep mid-wicket where Ravi Bishnoi takes it. All in Kieron Pollard’s hand now. 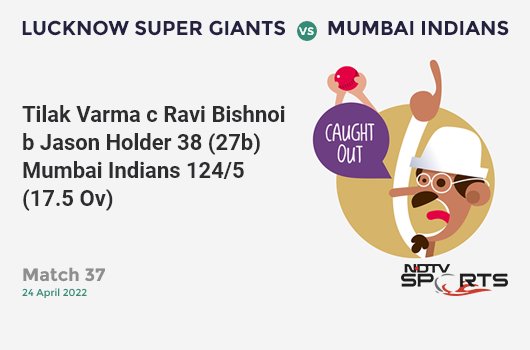 17.4 overs (2 Runs) Full ball, on off. Varma clears his front leg and smacks it to long on. The fielder runs to his right and dives to save it. A couple.
17.3 overs (0 Run) Fuller ball, outside off again. Varma shuffles a bit across and tries to sweep across but misses.
17.3 overs (1 Run) Wide! This is full and way outside off. Varma tries to reverse scoop it but misses. A wide.
17.2 overs (1 Run) Too full and outside off. Kieron drills it to long off for a single.
17.1 overs (1 Run) A low full toss, outside off. Varma smashes it to long off for a single. Singles won’t do for Mumbai. They need to go big now.
16.6 overs (0 Run) Length ball, angling across and was the slower ball. Pollard swings wildly but misses. An excellent spell from Mohsin Khan.
16.5 overs (1 Run) Follows Varma on the leg side. Varma dabs it to short third man for a single.
16.4 overs (1 Run) On middle, it is worked to deep mid-wicket for one.
16.3 overs (0 Run) On a length and outside off. Pollard looks to push on the leg side but mistimes it on the pads. There is a fielder standing straight down the ground.
16.2 overs (6 Runs) SIX! Bullet shot! Short of a length and on middle. Pollard muscles his pull to deep square leg and the ball goes flat and all the way for a biggie. 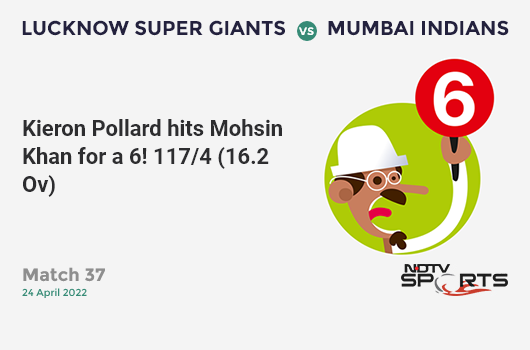 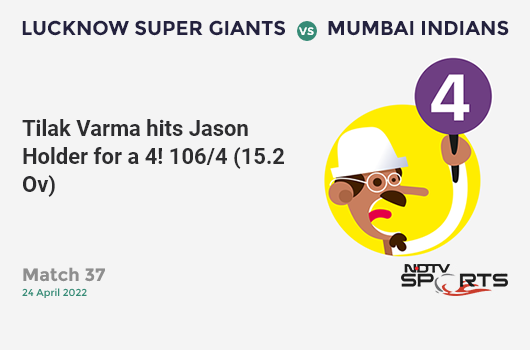 15.1 overs (4 Runs) FOUR! Clears infield! 100 up for Mumbai! A length ball, outside off. Varma slaps it hard and over mid off for a boundary. 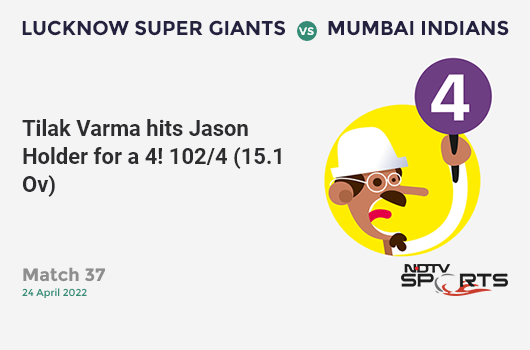