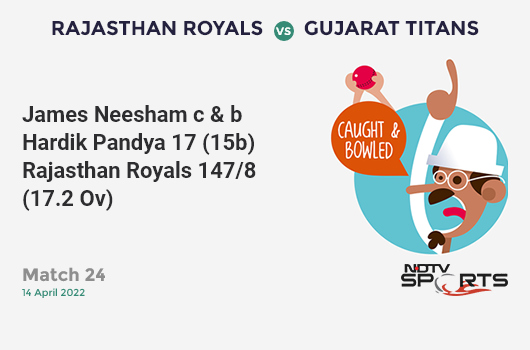 17.1 overs (2 Runs) Full ball, on middle. Neesham steps across and tucks it to square leg for a brace. Good running.
Hardik Pandya (2-0-15-0) brings himself back into the attack!
16.6 overs (1 Run) Shorter and on middle. James hits it to covers for a single.
16.5 overs (4 Runs) FOUR! Neesham holds the key for Rajasthan now. Fuller ball, on off. Neesham powers it in the gap and to deep mid-wicket for a boundary. 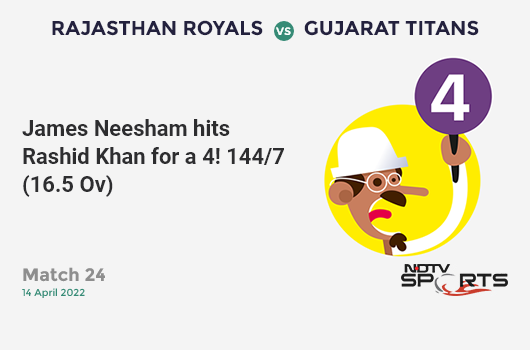 16.4 overs (1 Run) This one spins away from the batter. Krishna guides it to deep point for a single.
16.3 overs (0 Run) A googly, on middle. Krishna tickles it to short fine leg.
16.2 overs (1 Run) Touch short and on off. Neesham pulls it hard but straight to deep mid-wicket. A single.
16.1 overs (0 Run) Flatter, outside off and was the googly. Neesham fails to ready it and misses his push.
Prasidh Krishna comes to the crease now.
15.6 overs (0 Run) OUT! TAKEN! A full toss, around the waist. Parag swings his bat and hits it straight in the hands of Gill at deep mid-wicket. Parag quickly asks for a no ball but the replay shows it was well below the waist and Parag has to walk back to the pavilion.
15.5 overs (0 Run) A yorker now, on off. Parag can only squeeze it back to the bowler.
15.4 overs (1 Run) Comes around the wicket and angles it on middle. Neesham tucks it behind square on the leg side for a single.
15.3 overs (1 Run) A low full toss, on off. Pushed to mid off for a quick single.
15.2 overs (0 Run) Short of a length and just outside off. Parag makes room and looks to cut but misses.
15.1 overs (6 Runs) SIX! Just what Rajasthan needed! Fabulous shot from Parag! A length ball, on middle. Parag stays back and flicks it superbly over mid-wicket for a biggie. Proper timing. 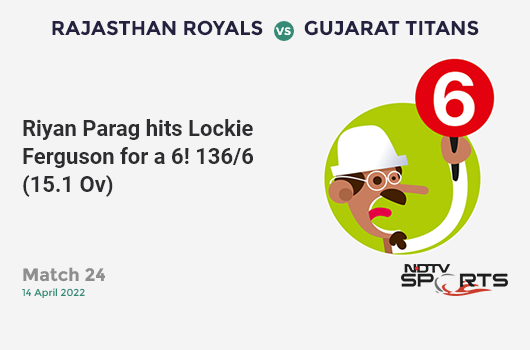