4.5 overs (1 Run) On middle, this is nudged towards mid-wicket for one again.
4.4 overs (0 Run) Wade is disappointed! He loves the paddle scoop, does try that. This was also there to be hit, it was a length ball around off, Wade misses.
4.3 overs (1 Run) Angled into the pads, this is clipped through square leg for one.
4.2 overs (4 Runs) FOUR! That is a fortunate boundary! Sai was beaten for pace there! Short and on middle, a really well-directed bumper. Sai Sudharsan looks to pull but this hits the top edge and then the helmet. Goes over the first slip fielder and into the fence. 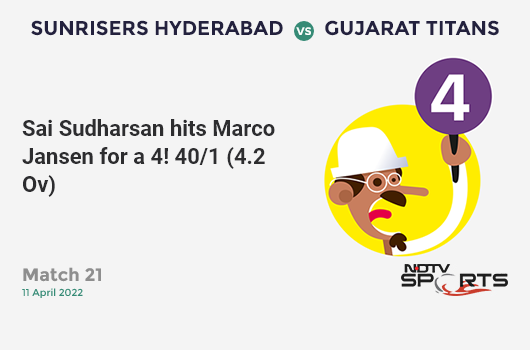 4.1 overs (0 Run) Length and on off, Sai Sudharsan opens the face of the bat and guides it to point.
Marco Jansen (1-0-7-0) to bowl from the other end now.
3.6 overs (1 Run) 6 from Sundar’s first! On middle, Sai pushes it down to mid on and gets to the other end.
3.5 overs (1 Run) Now a single! On off, shorter, this is pushed down to long off for one.
3.4 overs (4 Runs) FOUR! Was that a chance? Maybe Abhishek Sharma did get a hand to it! On middle, Wade gets out the reverse sweep, he hits it hard, it goes towards point. Sharma dives to his left and gets two hands to it but it goes through and to the fence. That could have been taken. Tough chance but a chance. 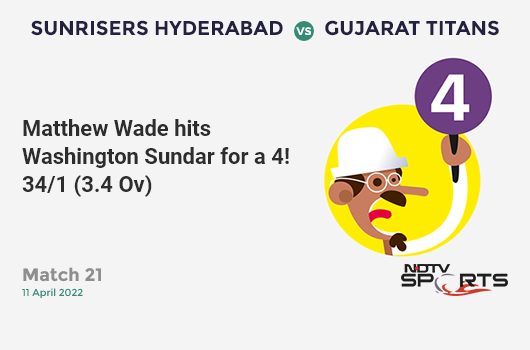 3.3 overs (0 Run) Really well bowled! Slower and on middle, defended.
3.2 overs (0 Run) Quicker and on middle, Wade pushes it back to the right of the bowler.
3.1 overs (0 Run) Starts off with a flatter one on off, defended well.
2.6 overs (1 Run) Well fielded! End of a successful over for Hyderabad! On off, Wade opens the face of the bat and plays it towards point. The fielder dives to his left and stops it well. Just the run.
2.5 overs (4 Runs) FOUR! Timed wonderfully! On middle, Wade shows the full face of the bat and times it past mid on for a boundary! Beautiful shot. 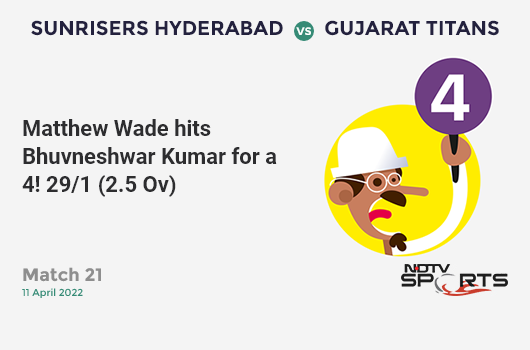 2.4 overs (1 Run) Sai Sudharsan is off the mark! On off, this is guided down to third man for one.
2.3 overs (0 Run) Good length and on off, defended.
Sai Sudharsan is in at number 3.
2.2 overs (0 Run) OUT! TAKEN! That is a stunner, an absolute stunner. One needs to produce something special to get rid of Gill, especially in the form he is and Rahul Tripathi has done so! This is on a length and around off, this is drilled, it is right off the middle as Gill looks to hit it on the up. It goes to the left of the fielder at covers like a rocket. He dives and takes it brilliantly. A one-handed stunner. A welcome wicket as Gujarat had got off to a flier. Also, this is surely going to be one of the best catches of the tournament. 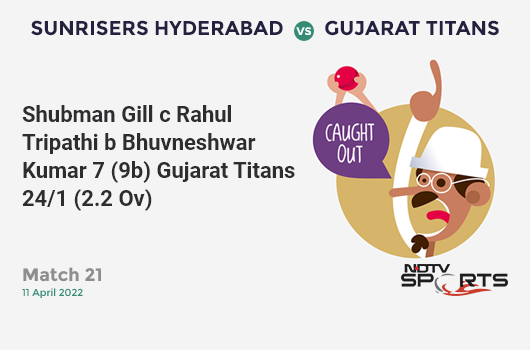 2.1 overs (0 Run) Better start from Kumar! Good length and on off, defended.
1.6 overs (1 Run) Another single to end another good over for Gujarat. They are off to a flier. On off, this is pushed to mid off for one.
1.5 overs (1 Run) That was a very risky run! Length and on off, Wade drops it towards the off side and takes off. Jansen gets to the ball, turns and has a shy but misses at the bowler’s end.
1.4 overs (1 Run) A little too straight this time, Gill looks to flick but misses to get hit on the pads.
1.3 overs (0 Run) Back of a length and on middle, defended well.
1.2 overs (4 Runs) FOUR! That went very high but cleared the in-field and that is what you have to do in the Powerplay! On middle, Gill comes down the track and heaves it over the mid-wicket fielder for a boundary. 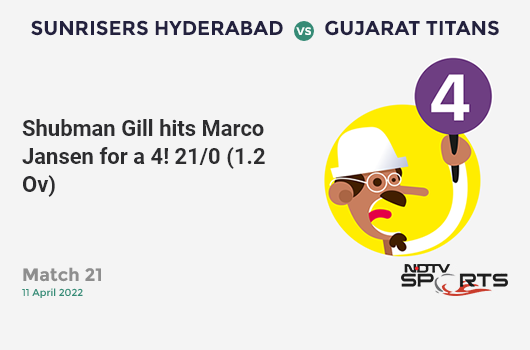 1.1 overs (0 Run) Good length and on off, Gill defends it towards cover.
0.6 over (0 Run) A dot to end an expensive first over! This is slanted across the left-hander but is a bit fuller. Wade leans in but lets it through to the keeper. 17 off the first over!
0.5 over (0 Run) On a good length, angled across the left-hander. Wade gets a bottom edge back onto the deck as he looks to cut.
0.5 over (5 Runs) FIVE WIDES! Another really poor delivery from Kumar. Wat down the leg side and Pooran cannot get to it. The ball runs away into the fence and Gujarat get five more bonus runs.
0.4 over (1 Run) Shubman Gill is off the mark. Around off, bunted away towards covers and they sneak in a quick single.
0.3 over (0 Run) Much better from Bhuvi. Fullish ball, close to the off stump and shaping in a bit. Gill leaves it alone.
0.3 over (1 Run) WIDE! Bhuvneshwar Kumar hasn’t quite gotten his radar right yet. A bit further up and wide of off stump, shaping even further away. Wided.
0.2 over (1 Run) Leg bye! On leg stump, Wade looks to flick but misses. The ball goes off the pads and towards square leg. They get a leg bye.
0.2 over (5 Runs) FIVE WIDES! Poor line from Bhuvi this time. Length again, around leg stump and shaping into the left-hander. The ball goes down the leg side and Nicholas Pooran cannot get a glove on it. The ball runs away into the fine leg fence.
0.1 over (4 Runs) FOUR! Unlucky! Bhuvi starts off with a lovely length ball, pitching around leg and shaping away. Matthew Wade gets squared up and the ball goes off the leading edge and past the slip cordon for a boundary. Wade and Gujarat are up and running! 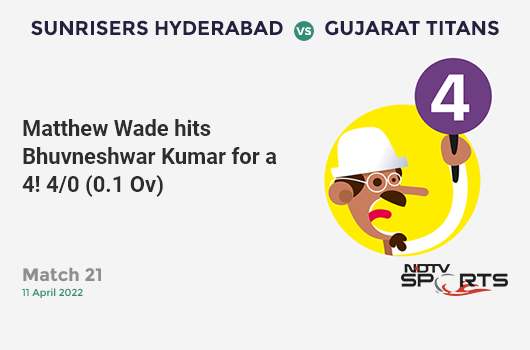 All in readiness! The umpires walk out to the middle as the Hyderabad players are seen in a huddle. Gujarat openers Shubman Gill and Matthew Wade stride out to the middle as well. Bhuvneshwar Kumar has the new ball in hand and is raring to go. Let’s play…
Gujarat skipper, Hardik Pandya says that they would have bowled first as well just because of the dew factor but batting first is fine too. Adds that the process matters more than results and if they put the hard work in, the results do come. About Rahul Tewatia, he says that he’s right up there as a finisher and he works hard day in and day out. Also informs that they are going with the same playing XI.
Kane Williamson the captain of Hyderabad says that they will have a bowl first as there is potential for dew. He adds that they have improved in the last couple of matches and will look to improve further. Mentions that they play across four different grounds and hence have to be adaptable. Informs that there are no changes to the playing XI.
Gujarat Titans (Unchanged XI) – Matthew Wade (WK), Shubman Gill, Sai Sudharsan, Hardik Pandya (C), David Miller, Rahul Tewatia, Abhinav Manohar, Rashid Khan, Darshan Nalkande, Mohammad Shami and Lockie Ferguson.
Sunrisers Hyderabad (Unchanged XI) – Abhishek Sharma, Kane Williamson (C), Rahul Tripathi, Nicholas Pooran (WK), Aiden Markram, Shashank Singh, Washington Sundar, Bhuvneshwar Kumar, Marco Jansen, Umran Malik and T Natarajan.
TOSS – Up goes the flip of the coin and it lands in favour of Hyderabad. They have elected to BOWL first.
PITCH REPORT – Daren Ganga is pitchside. He says that the match will be played on pitch one and the dimensions are different from the last game here. Adds that there is a bit of grass but it is a bit patchy as well. Reckons that there will be a bit of bounce and scoring runs inside the Powerplay is the key as spin will be effective in the middle overs due to the dryness of the surface.
Gujarat have had a dream start to the tournament. They have won three out of the three games they have played and are favourites heading into this game as well. Hyderabad though come into this after winning their last game against Chennai and their confidence will be high. Hyderabad look a lot more complete as a team than they were last year but can they topple a Gujarat side that is filled with superstars of the modern generation?
The Indian T20 League is moving along smoothly and we now head into game 21 and it is a clash between two sides who are on the opposite ends of the table. One is in the top three and the other is languishing in the bottom half. Hyderabad will be taking on Gujarat. Welcome to the coverage.
… MATCH DAY …
Advertisement